Sign up to our newsletter Gift Boxes Gift Vouchers 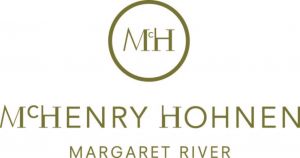 The beautiful Margaret River in Western Australia is home to McHenry Hohnen Vintners, and they are a real family affair, founded in 2004 as a family venture between Murray McHenry and his brother- in-law David Hohnen. Their story is steeped in the history of the region and their experience in making wine in the area dates back to the early 1970’s, with Murray being an accomplished fine wine retailer and David a Margaret River wine-making pioneer.
Since its inception, McHenry Hohnen has had an unwavering target on crafting site expressive wines, and with the adoption of biodynamic and organic farming techniques, the focus is on minimalist intervention in the winery, with wild yeast, minimal sulphur, no filtration, large format oak and concrete fermenters all playing integral roles in allowing the seamless transition from sustainably grown fruit to site reflected wines.
The grapes are sourced from their three family owned vineyards, and each site has been selected for its individual characteristics and aspect to sunlight. Within the three vineyards, fourteen varieties are cultivated. These reflect the region's heritage with the Bordeaux varieties of Semillon and Sauvignon Blanc, Malbec, Merlot, Cabernet Sauvignon, and Petit Verdot. They also acknowledge the Mediterranean climate of Margaret River with varieties associated with southern France and Spain, and feature Marsanne, Roussanne, Grenache, Mataro [what they call Mourvèdre in Australia], Shiraz, and Tempranillo. Zinfandel and Chardonnay [in fact, their Chardonnays are so refined and elegant that they give Burgundy a run for its money!] complete the foundations from which fruit is selected for the McHenry Hohnen range of wines.
Each wine is a focussed expression of its variety, and has its own personality from their three unique family vineyards - Burnside, Calgardup and Hazel’s.
CALGARDUP BROOK VINEYARD - planted in 1998, this vineyard is within the Karridale sub-region of the Margaret River wine region, and lies just inland from the coast, ensuring that the vineyard is moderated by cooling sea breezes. These have a significant influence on the vineyards of the Leeuwin Naturaliste Ridge which connects Cape Naturaliste in the north of the region with Cape Leeuwin in the south. The dry-grown vines grow in ancient sandy, schisty soils. The western end of the vineyard comprises of sandy loam on a clay base with the eastern end of the site shifting to sandy clay loam soils. The vines run east west on a slightly sloping northern aspect.
BURNSIDE VINEYARD – located on the bend of the Margaret River, within a few kilometres of the great Indian Ocean. Planted in 1981, it is one of the older vineyards in the region. The vines grow in unique micaceous black soils. On this rich solid soil structure the vines are planted on a steep northerly aspect running in a north-west to south-east orientation. Their roots reach deep into the rich gravel loam ensuring the vines do not require irrigation.
HAZEL’S VINEYARD – their southernmost vineyard which is more inland than their Burnside and Calgardup vineyards. Hazel’s combines cooling Southern Ocean influences with a northerly aspect, plenty of sunshine, and free-draining, ironstone gravel loam soils. The vineyard is located in the headwater of the Chapman Brook, near Witchcliffe in the south of the Margaret River region. Hazel’s vineyard forms the backbone of their portfolio with plantings of Chardonnay, Cabernet Sauvignon, Zinfandel, Merlot, Grenache, Petit Verdot and Mataro.
At McHenry Hohnen they say that they are continually looking at ways to develop their land and their wine making process to offer balanced and expressive wines, and look to the future with anticipation as the quality of their wines is forever evolving, knowing that some of their best are yet to come!
Winery Website
Display: Grid / List
Product Compare (0)
Print
Show:
Sort By:
On Sale!
McHenry Hohnen Vintners - Rocky Road Cabernet Merlot 2015/2016
Country: Australia
Wine Type: Red Wine
Grape: Cabernet Sauvignon, Merlot
Add to Compare Add to Wish List
Case Rate: £13.25 Price(Bottle): £15.95 £13.95 Ex Tax: £11.63
Add to Cart More Info
On Sale!