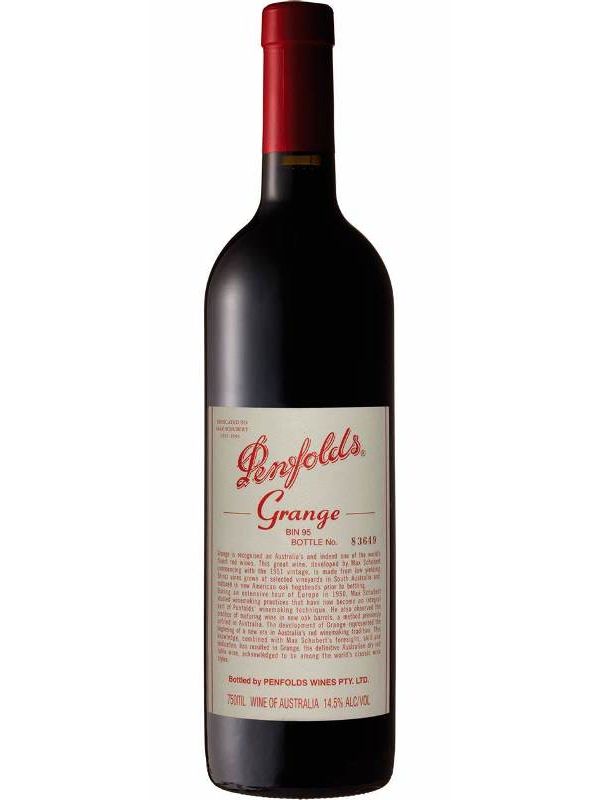 Luminous deep red in colour with a violet rim. Aromas of blackberries and plums on the nose, underlain with toasty cedar, licorice and umami characteristics. A complex tapestry of blue and black fruits harmoniously woven with notes of chocolate and mocha on the full-bodied palate. Astonishingly long smooth finish. A powerfully expressive and truly unique wine. There is truly nothing quite like Grange!

The nose of the 2015 Grange features the wine's characteristic lifted aromas, joined by pronounced American oak influence and bold blackberry fruit, plus hints of red meat, raspberries, asphalt and vanilla. It's dense and concentrated on the palate, full-bodied yet balanced and firm, with a rich, velvety texture and long, plush finish. Don't expect great complexity at this stage—it's much too young to show much more than the primary fruit and oak elements—but this is a Grange that should easily go three or four decades.

98% Shiraz, 2% Cabernet Sauvignon. From Barossa Valley, McLaren Vale, Clare Valley, Magill Estate. Aged for 20 months in new American oak hogsheads. TA 6.7 g/l, pH 3.62. At first, it's an unassuming nose. The palate has massive density and structure, almost as if the fruit has been locked down – but then on the finish, there is a lovely emergence of pure cherry and liquorice flavour with herbal, rosemary complexity and that signature oak essence adding spice. Enigmatic right now, but surely aiming for the big leagues. (RH)

Based on fruit from Barossa Valley, McLaren Vale, Clare Valley and Magill, and with 2% Cabernet seasoning to the Shiraz, the huge, brooding primary colour of youth is accompanied by the youthful primary black fruit, smokiness and sweet coconut and liquorice-spiced American oak (20 months in new hogsheads) that’s so typical of Grange. The richness and concentration of blackberry fruit opulence on the palate is inextricably bound up with a spice- and coconut-infused textural quality whose tannins, while big and bold, are surprisingly soft and sumptuous on the mid-palate. As the super-ripe blackberry and black cherry jam fruit subsides, the tannins kick in, along with a crispness ensuring that - in line with the Grange style generally - this heady wine will benefit from two decades of ageing. Drinking Window 2025 - 2045

Penfolds nailed the great vintage, making a wine that is perfect in every way. The blend of 97% shiraz and 3% cabernet sauvignon comes from the Barossa Valley, McLaren Vale, Clare Valley and Magill Estate in Adelaide, in that order, and as usual spent 18 months in new American hogsheads. Its detail is superb, with light and shade allowing blackberry and plum fruit pride of place, but there's also flashes of spice and licorice. It's as mouthwatering with the last taste as the first, and 7.3g/l of acidity leaves the mouth fresh.